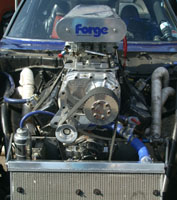 Nearly two years ago I wrote an article about speccing my ultimate development PC. Somehow there was always something more pressing to do. But I finally took delivery of my shiny new PC this week, partly spurred on by the fact that I wanted tried and trusted Windows 7 for the OS. Also my current development PC is getting increasingly crufty after 5 years of continual use.

I emailed my requirements to the top 3 custom PC companies in the UK as rated by PC Pro magazine : Chillblast, Cyberpower and CCL:

I’m looking for a PC for developing software. Prime requirements in order of decreasing importance:

Here is my wishlist of components:

Can you build something to meet this spec or get close? Please send me the spec and your price (including UK delivery).

Both Chillblast and Cyberpower sent me quotes for a system fairly close to what I wanted within 1 working day. I then spoke to their sales people and went online to tweak their suggested systems using their web based system ‘configurators’. In the end I chose Chillblast over Cyberpower due to:

However there really wasn’t a lot in it. CCL took nearly 2 whole working days to respond to my initial email,  so I discounted them as insufficiently responsive.

Following some suggestions made by the sales people I spoke to, this is the spec I ended up with:

I take security fairly seriously. I have a motorbike style ground anchor in my office and I want my shiny new box physically locked to it. But I was told that almost no PC tower cases have a Kensington lock slot. This seems crazy to me. My current Dell tower has one and the cost of one tiny little extra slot in the chassis must be pennies. So I had to buy a lock adaptor kit. It’s not the most elegant solution, but it works fine.

I ordered the system on 02-Oct and it arrived on 22-Oct. Here are a couple of photos of the new system with the side panels off. 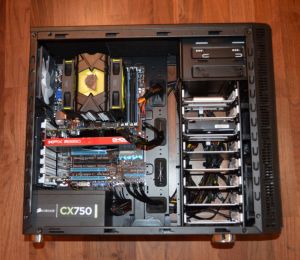 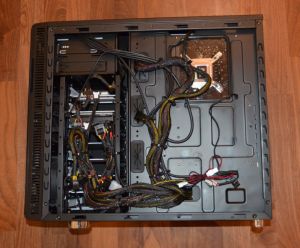 The PC took a few days longer than the originally advertised time to arrive. This wasn’t a big issue in my case. But I only found out it was going to be late when I emailed them after the expected completion date. It would have been a lot better if they had been more pro-active and emailed me first. Other than that I am fairly satisified with the service from Chillblast so far.

There are a few issues with the case, which aren’t really Chillblast’s fault. It looks rather lovely in its big, black, minimalist sort of way, a bit like an obelisk from ‘2001 a space Odyssey’. But the case scratches rather easily if you lay it down to change a component on my laminate floor. The side panels are also a bit fiddly to get on and off (my old Dell PC is better in this regard). Worst of all, it has rubber grommets (is that the right word?) that fall out into the case (and potentially into the fan or heat sink) if you even look at them funny. This means lying the case down to retrieve them, struggling with the side panels and more scratches. I have had to do this at least 4 times so far. It seems that they have made them of rubber that is far too soft for the job. Grrr.

How fast is the new PC? It certainly feels very snappy. I benchmarked it against my old Dell development PC (Dual Core 2.13 Ghz, 4GB RAM) building my event table planner software from scratch. This is 83k executable lines of C++ according to SourceMonitor:

So it is more than 4 times faster than the old PC at its key task – building software. Admittedly it isn’t a ‘fair’ comparison of the hardware. The older machine has a different version of Visual Studio, a different OS and probably some unnecessary services running in the background. But it is the best I can do in the circumstances and I doubt a ‘fair’ test would be much different. Despite the fact that I only went for a mid-range graphics card, the new PC can also handle playing Half-Life 2 on full 1920 x 1200 resolution without any noticeable issues. Hopefully the faster build times will give a significant boost to my productivity (as long as I don’t play too much Half-Life 2).

The new PC is also eerily quiet. I would guess more than 4 times quieter than my old PC. Even when it is doing a build, all you can hear is the faint whir of a fan.

Only time will tell how reliable it is.