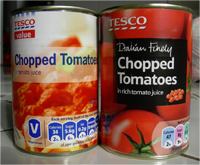 How much should you charge a customer for a product? From a pure economics point of view – as much as the customer is willing to pay. The airlines are masters of this. The people on a typical commercial flight pay a wide range of prices depending on factors such as: which class they are travelling, whether they are returning before the weekend and how far ahead they booked. The smug businessman in first class (who booked a week before and is returning the same day) might be paying more than 10 times as much for a seat as a someone in economy (who is going on holiday for 2 weeks and booked 6 months in advance). The businessman probably isn’t spending his own money, so he doesn’t care that much what the price is. Does the business traveller cost the airline 10 times as much? Of course not. The airline is simply maximizing its profits by charging more for the people who are prepared to pay more.

Supermarkets also use multiple price points by offering value, standard and gourmet versions of common products. The gourmet version has pictures of smiling farmers and tells you how it was lovingly hand-picked from a sun drenched hillside in an exotic country. The value version looks like UN emergency rations. The supermarket hopes the less price sensitive customers will buy the gourmet version, but they still want something they can sell to the more price sensitive customers. Is there much difference between the 3 products part from the packaging? Probably not.

When you start to look around you can see there are lots of different strategies businesses use to charge according to how much the customer is prepared to pay. Does a hardback book cost significantly more to produce than a softback book? No. But if you really want to read the book you will pay the extra for the hardback, rather than wait 6 months for the paperback. The gaming industry doesn’t even bother to change the product. Hardcore gaming fans will pay £40 for  a new blockbuster game. A year later you can get the same game (probably with bug fixes and add-ons) for £15. Two years after that it will be in the bargain bin for £5. Discount coupons are another common method you can use to charge price sensitive customers less.

I decided to try multiple price points for my table planner software. The graph below shows the 12 monthly cumulative sales[1] of my product for a year before and a year after moving from 1 to 3 price points. The red arrow points to the month I made the change. The revenue for the 12 months after the change were almost exactly 50% higher than the 12 months before. 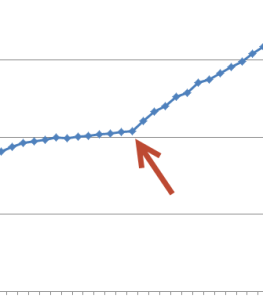 Before September 2009 there was only 1 edition of PerfectTablePlan and it cost £19.95. Initially PerfectTablePlan was aimed at people planning their own wedding, bar mitzvah, Quinceañera etc. Typically they would only use the software once, so £19.95 was a sensible price. But as the product matured and improved it was increasingly being used by professional planners. It seemed crazy to be charging professional planners such a low price for software they might be using every week. So I decided to add additional price points at £49.95 and £199.95. The higher price points having additional features aimed at frequent and professional users.

I choose 3 price points because this seems a natural fit for the different types of people using my software (one-off users, frequent users on a budget and professional users spending someone else’s money). This turned out to be a big win for me. Not only did my average order value shoot up, suddenly I had more credibility with professional event planners, who might not have taken a £19.95 product seriously, no matter how good it was. Price is a signal of quality, after all.

Having 3 editions of the product with different feature sets also allows me to offer an increasingly sophisticated product to ‘power’ users without overwhelming more ‘casual’ users. This is a big bonus for all my customers and it reduces my support burden considerably.

I thought carefully about how to introduce the extra price points part way through the life of the product so as not to confuse or alienate existing users. I decided it would be too complicated to add the new price points at the same time as doing a major (paid) upgrade from v4 to v5. Instead I released the new editions at the same time as the v4.1 upgrade. I announced ahead of time that v4 would become v4 Home edition and that 2 new products were being released: v4 Advanced edition and v4 Professional edition. I was careful to ensure that I added plenty of new features and didn’t remove any existing features between v4.0 and v4.1 Home edition, so users who didn’t want to upgrade didn’t feel cheated. They were few complaints. I encouraged existing customers to pay the difference to upgrade edition and many did.

All 3 editions of the product are contained in a single executable and customers can switch between the editions dynamically at runtime. This was more work initially than using #defines to create 3 separate executables, but I think it was worth it as it allows the customer to easily trial or upgrade to a different edition without reinstalling or re-starting PerfectTablePlan.

A lot of software products have 2 or 3 editions, with the most expensive edition costing 1.5 or 2 times the cheapest edition. This seems far too narrow a range to me. I’m confident that a professional event planner can get at least 10 times the value from the product compared to someone planning their own (hopefully) once-in-a-lifetime wedding event. So I decided to go for a 10:1 difference between the cheapest and most expensive edition. If the airlines can do it, why can’t I? In retrospect I think this was a good call.

Having multiple price points is not without its downsides. It makes the sale more complex and it is an extra decisions for the customers to make. People are demotivated by having too many choices and I think having multiple price points has reduced my visit:sale conversion rate slightly. So don’t add too many price points. 3 is probably plenty in most cases (the supermarkets should know). But the slight drop in conversion rate has been made up many times over in a significant increase in average value per order. Also I should point out that the increase in sales wasn’t ‘free money’. I had to do a lot of work to add the extra features to sufficiently differentiate the 3 editions of the software, overhaul the licensing, tweak the website etc. But it was definitely worth the effort for the increase in sales. I think it also been beneficial to my customers as they now have a choice of which edition of the product best fits their budget and requirements.

[1] Each point is the total sales for that month and the previous 11 months.