I am running a course for people who want to create their own commercial software products. Promoting the course has been a challenge. How do you reach a programmer, sitting in his cubicle, dreaming about making a living from selling his own software? In particular, how do you reach ones who might pay to attend a weekend  course in the UK in March? Most of the attendees of the last course came via this blog. But I also want to try to reach people who have never heard of this blog. So I have been experimenting with paid ads via Twitter, LinkedIn and Adwords. Crucially, all 3 of them allow me to restrict my advertising to people in the UK. I thought the initial results were interesting, so I am sharing them here.

Google Adwords allows you to show your ads alongside organic (non-paid) search results when people type relevant phrases. But it is hard to think of phrases my target audience (and only my target audience) might be searching on. Terms such as “software marketing” and “software sales” are too vague. In the end I came up with about 200 phrases, including  “sell my software”, “software startup”, “start a software company”, “name software product” and “sell software online”.

One of my Adwords ads.

But there just aren’t a lot of searches on these phrases. Bidding between £0.25 and £1 per click (depending on relevance) for UK searches over the last 47 days I have managed a meagre:

Looking at the Dimensions>Search terms report to see the phrases typed by the people who clicked, the clicks seem fairly well targeted. And my impression share is >25% for the majority of the adgroups, so I don’t think increasing my bids is going to make a big difference to the amount of traffic. Adwords just doesn’t work that well unless there are unambiguous phrases your potential customers are actively searching on. I haven’t tried display (content) ads, as these have never worked well for me in the past.

One of my linkedIn ads.

The result over 12 days have been:

That is a good number of impressions, but a horrible CTR. Looking at the breakdown of clicks by industry and job function in the reporting, the clicks seem fairly well targeted. A ‘lead’ is where someone expresses an interest and LinkedIn allows you to send them a message. But you don’t get their email address and it appears you can only message them through LinkedIn once.

I paid to put a sponsored tweet in the timeline of Twitter users in the UK, based on who they follow. I picked the Twitter handles of 4 other people who blog about bootstrapping.  Note that Twitter claims they won’t show ads to all the followers of these Twitter handles, but to people who are interested in similar things to the people who follow those Twitter handles. That seems a rather hair-splitting distinction, but I guess it allows them to claim they aren’t exploiting the popularity of their customers directly. I bid a maximum of £0.75 per ‘engagement’ (click, retweet or follow). I didn’t include an image with the tweet as I couldn’t really think of anything relevant at the time (a classroom?). The text of the sponsored tweet was:

Sell your own software. Be your own boss! 2 day course, 22/23 March, Wiltshire, England. Full details at: https://successfulsoftware.net/software-business-training-course/

The result of this 1 sponsored tweet over 2 days has been:

Given the small number of favorites, retweets and follows, it is hard to know how well targeted this was. I guess a 3% CTR implies it was fairly targeted. The fact that the CPC was a lot less than my maximum bid may be down to Twitter ads being a relatively new medium, without too much competition (yet).

The reports have left me confused. Twitter report 3,112 impressions and 106 clicks for followers of my own Twitter handle @successfulsw. 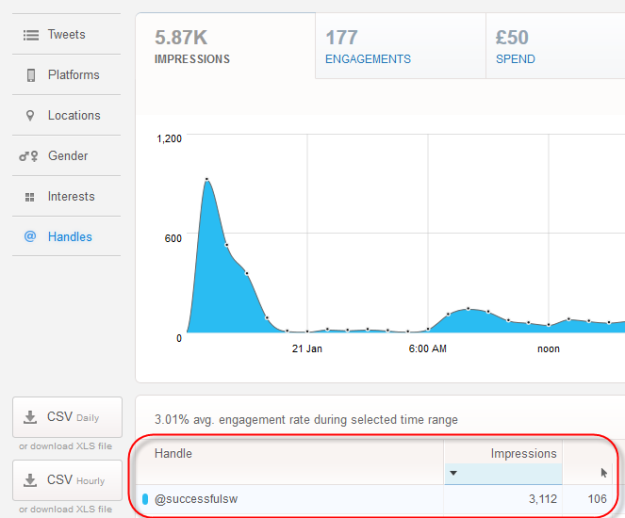 This was the response when I queried Twitter support:

Thanks for the information. We have investigated this issue and we can see that your handle is in your @handle section of your campaign, this is because implicit targeting was enabled (targeted followers with similar interest as your followers), that is why your handle is showing there. We have confirmed you have a nullcasted Tweet and this Tweet is not showing to your followers. We realize this may be confusing and we’ll work with our product team to improve how this looks on the user interface. 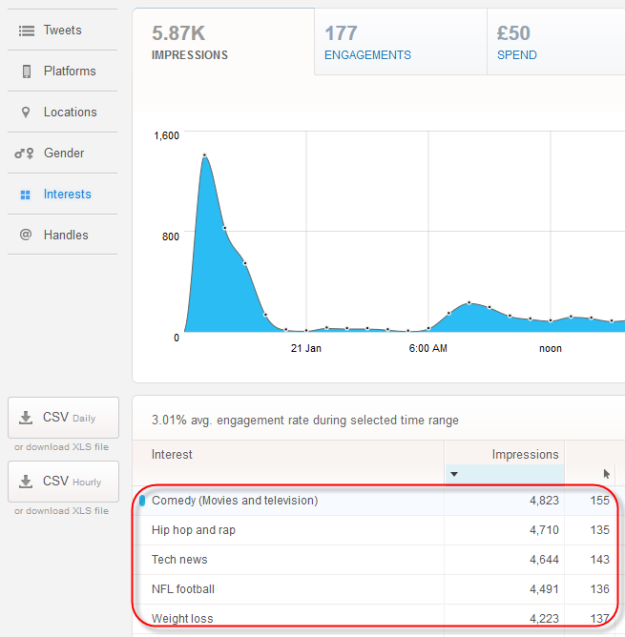 This was the response when I queried Twitter support:

I understand it’s confusing, and I’ll share this feedback with my team. What you’re seeing is a cumulative total of paid/earned/organic engagements. This total also considers secondary account signals eg a users prime interest is photography, and a secondary interest in baseball. I can assure you that you paid for primary interests only, and organic/earned and secondary engagements were not charged for.

I am still none the wiser about the “NFL football” result. It does make me wonder how accurate their ‘targeting by interest’ option is.

This is obviously only a very small experiment and it is hard to judge exactly what the quality of the traffic was like (I was sending traffic to a wordpress.com page and I am not able to measure detailed analytics, such as bounce rates or time on page). But I even these limited results are still illuminating.

I like Adwords, particularly the fact that it shows your ad to people at the point they are searching for a solution to their problem. It has worked pretty well for my table planner app over the last 9 years, despite bid price inflation. But Adwords is only effective when there are well defined phrases with reasonable search volumes you can target. That doesn’t seem to be the case for my course.

LinkedIn is a good way to target people according to their skills or job function. There are lots of different targeting options and the traffic volume was better than Adwords. But the clicks are very expensive. Given an industry standard 1% conversion rate I can afford to pay $2 per click to promote a £600 course. But forget it if you are selling less expensive products.

Twitter ads seem quite promising. There are lots of targeting options and you can get a lot of traffic quickly for a relatively low price per click [but see update, below]. I could have got a lot more clicks by targeting more Twitter handles and/or increasing my bid. But its not something you can leave running continuously like Adwords or LinkedIn. You have to keep sending new sponsored tweets. Also the reporting is confusing and of dubious veracity. Finally it feels slightly grubby to be targeting the followers of your peers and/or competitors so directly. But I think it shows promise. If you are going to try it, I recommend you do so soon. The law of shitty clickthroughs means that it is sure to be a lot less cost effective in a few years time.

Twitter Ads measures engagements which we define as “clicks” within the Promoted Tweet Dashboard are defined as follows: clicks on the URL, hashtag, Tweet copy, avatar and username, or the expand button. It’s likely that the other analytics you are seeing are tracking link clicks.

So I am paying for someone to just click the Tweet copy (text)! The cost for a clickthough to my site is actually around 3 times the CPC reported by Twitter. That makes it around £1 per clickthrough, which is much less attractive.

9 thoughts on “Adwords vs Twitter vs LinkedIn ads, a small experiment”