I loved Lego as a child. Now I have a two year old son I have a good excuse to play with it all over again. Below are some of things I have managed to construct out of Lego Duplo with his ‘help’ (building something out of Lego with a two year old reminds me of playing Tetris, only in 3 dimensions rather than 2).

What has this got to do with software? Not a lot. I am not even going to attempt a strained analogy with software design. But I figure nearly everyone interested in software also likes Lego, even if they haven’t played with it for a few decades. Am I wrong? Some of you might have preferred Meccano – but you are probably Perl programmers now. Serves you right. 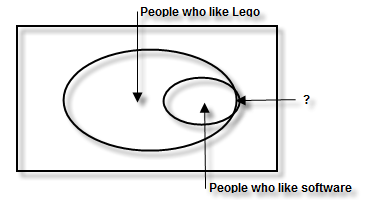 Anyway, I am looking for some inspiration for future creations. A search on Google only turned stuff a bit out of my league or not very appropriate for a two year old (work safe). Have you (or your children) built anything good out of Lego (Duplo, classic, Technics, Mindstorms etc)? If so, please post a link to a photo in the comments below. Alternatively email them to me and I will add them for you.

I reserve the right to sneer at anything made by following instructions on a packet.

Scott: “It may not be as involved as your creations, but my daughter absolutely loved this crane that I made.”

Bob: “I have many happy memories of building LEGO projects with my son who is now studying Computer Aided Product Design in college. He started out with bricks, then Technics, and then MindStorms. I think the LEGO people should be commended for having made some excellent products over the years.”

Stephen: “Like you, I also had Lego when I was a kid. Meccano, I did not have.
I could never afford too much Lego, so had to settle for one railway
engine and a really small amount of track to go with it. The things I
buy my nephews are much more involved. Quite a change.

Anyway, some tidbits of Lego info for you. The moulds for the bricks are
machined from tungsten carbide using diamond cutting bits and machines
the moulds to 1 millionth of an inch accuracy. My uncle’s company wrote
the CAD software that controlled the CAM machinery for this operation.
That info is I guess, now about 20 years old. I’ve no idea if they still
make them the same way, But apparently that is how they did it back then
(assuming my memory hasn’t tweaked any details). I was always told it
was 1 millionth of an inch but that may have been for explanation’s sake
and they may well have measured in microns, fractions of a millimeter. I
guess stepper motors are your friend for this type of job.

The bit I love is that the moulds are made out of something so
tough they have to use diamonds to cut them. And all for some
lightweight plastic bricks!”