In January of this year I got to fulfill my long-time ambition of flying in a fast jet (that’s me in the picture above). I got a lot of questions from friends and family about it. So I thought I would write about it here, in case anyone else is interested.

What was the plane?

An Aero L-39 Albatros advanced jet trainer. Developed in Czechoslovakia, it is the most widely used jet trainer in the world and similar in size and performance to the Hawk used by the Red Arrows. Maximum speed Mach 0.8. This particular plane was apparently ex-Ukrainian Air Force. To my untrained eye, it looked it in excellent condition. The picture below is of the actual aircraft on the day. 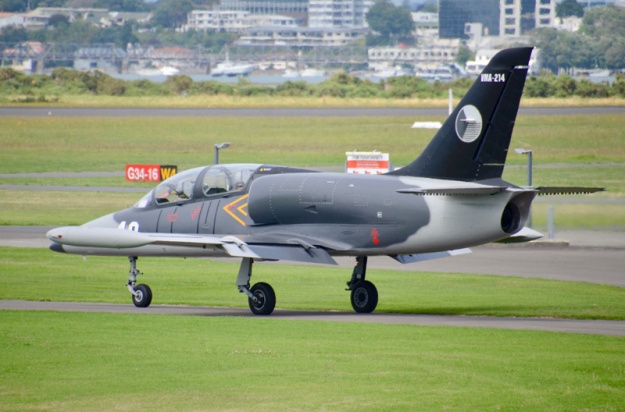 Where did you do it?

At fighterjets.nz in Tauranga, New Zealand, while on holiday.

What happened before the flight?

The first scheduled date was cancelled due to low cloud. We rescheduled to a few days later and the weather was beautiful.

I was kitted out in a flight suit, helmet and a small life jacket (!). I was then given a briefing by my pilot, JC, a serving Air Zealand Airlines long-haul pilot and ex New Zealand Air Force pilot. When I was asked what sort of flight I wanted, I opted for ‘Top Gun’ (aerobatic). There doesn’t seem to be much point in getting into a fast jet and then going sightseeing.

I was helped into the back seat of the plane (it is a bit of a climb), strapped in and attached to the intercom. As mine was the first flight of the day we did various checks before take-off, including powering the engine up and down. We then got clearance from air traffic control and off we went.

What happened during the flight?

We flew out over the sea and did a succession of rolls, turns and loops. I have been in various small aircraft before (propeller driven planes, gliders, helicopters and a gyrocopter), but this felt quite different to all of those. Much more powerful and responsive. It was also the first time I have been upside down in aircraft. Looking up at the earth is a very surreal experience.

it was a beautiful day in a beautiful part of New Zealand and the views were stunning (pretty much all of New Zealand is beautiful). I couldn’t see the pilot at all because of his seat, but he kept telling me what was going on and checking I was ok via the 2 way intercom. I guess he was pretty keen to ensure that I didn’t panic or redecorate the inside of the cockpit.

At one point I looked down at some small white shapes flying below. I thought they were seagulls. But then I realized they were other aircraft.

At the end we did a low pass over the town before landing.

How did you feel afterwards?

What about the G forces?

We got up to +4G in the loops. When you do a positive G manoeuvre the blood tries to drain out of your head. This can cause a loss of consciousness. I had been briefed to do the ‘Anti G Straining Manoeuvre’ during turns and loops, to reduce the chance of passing out. It is pretty much like straining to do a tricky poo (but hopefully without the actual pooing). You can see a video of someone doing AGSM under +9G of acceleration here:

I didn’t feel the G force much on my torso, which was tightly strapped down, but my arms felt incredibly heavy if I tried to move them during the loops. I did feel a little light headed at one point and my hands tingled. But I tried to be conscientious with my AGSMs and I didn’t feel close to passing out.

Did you feel sick?

I was starting to suffer a bit on the last couple of manoeuvres. In retrospect I probably should have asked him to go easier on me towards the end, rather than trying to tough it out. But thankfully I didn’t need the sick bag provided (‘do a Clarkson’).

Did you get a G-suit?

No. They are made to measure, so the pilot got one, but I didn’t. On balance, it was more important that he didn’t black out.

Did you get a go on the controls?

No. The plane was dual controls, but I was under strict instructions not to touch anything. I have had a go at the controls in a glider, but a jet is too high performance for a rookie.

What was the view like out of the canopy?

Amazing. I couldn’t see directly ahead because of the pilots seat, but otherwise the visibility was excellent. Comparable to what you can see from a glider.

Did you take a camera?

No. You probably wouldn’t be able to hold onto it during the manoeuvres. If you dropped it, then it could have bounced around inside the cockpit and possibly got wedged somewhere disastrous (e.g. under a foot pedal). However there was GoPro in the cockpit and they sent me a high quality video of the flight a few days later as a memento. The image above is taken from the video.

Was there an ejection seat or parachute?

The plane has ejections seats, but New Zealand civil aviation rules required them to be deactivated. The pilot told me that bailing out with a parachute was complicated and impractical for people who weren’t experienced pilots. So we didn’t have parachutes either. We would both be landing in the plane, whatever happened. In the unlikely event of loss of engine power, we would probably have enough height and speed to glide back to the airport. If not, we would probably head for a beach.

I was a bit apprehensive on the morning. But I wasn’t going to back out on a long-time ambition. Especially as there was no refund for cancelling on the day. Also I was reassured by having a very experienced pilot and the fact that his safety was intimately linked to mine.

It wasn’t very loud from inside the cockpit. Partly due to me wearing a helmet and the cockpit pressurization might have also made a difference. My family said it was pretty loud from where they were standing though.

Did they play the theme music to Top Gun?

How long were you in the air for?

I think something around 25 minutes. That was enough!

How much did it cost?

Somewhere around (cough) $2,500 US. That is a lot of money (although an order of magnitude cheaper than flying a Mig-25). But I prefer to spend my money on experiences, rather than things, and I have a very understanding wife. I am probably still going to be banging on about ‘that time I flew in a fast jet’ when I am in a nursing home.

Would you recommend it?

Yes. If you have got a strong stomach and the sufficient bank balance, it is a pretty amazing experience. However flying in a glider is also pretty amazing and much cheaper (your local gliding club will probably take you up on a flight for around $100). So I recommend trying that first.