The traditional approach to Google Adwords is to set a bid price for each keyword. This is known as Cost Per Click (CPC). Google then then uses the bid prices in conjunction with a secret formula (the quality score) to decide how high to rank your ad in the Adwords results. If you bid more, your ad will appear higher and typically get more clicks, but your cost per click will increase. So setting an optimal bid price is important. Bid too little and you won’t rank high enough to get a decent number of clickthroughs. Bid too much and you will potentially end paying more to Google than you recoup in sales.

An alternative approach is to tell Google Adwords how much you are prepared to pay for a particular action, e.g. a sign-up, download or sale. This is known as Cost Per Action (CPA) or Conversion Optimizer. Google will then automatically calculate your bid prices and attempt not to exceed the CPA you set (although this isn’t guaranteed).

CPA sounds great. I can stay in bed a bit longer while the mighty Google brain does the bid tweaking for me. Unfortunately I wasn’t able to use CPA. I  count sales as conversions (not downloads) and I have my adwords account split into a number of campaigns by geographic region and by type (e.g. search vs content). Having my campaigns structured like this, rather than one monolithic campaign, makes for more flexibility (e.g. different ads, phrases and bid prices for different geographical areas) and more useful reports (e.g. separate reports for search and content). But it also meant none of my Adwords campaigns made the minimum threshold for conversions per month.

When Google dropped the minimum threshold for CPA to 30 conversions per campaign per month, one of my Perfect Table Plan search campaigns became eligible. So I did an experiment. I ran a campaign for 4 weeks using CPC, then 9 weeks using CPA, then another 4 weeks using CPC. I set the CPA bid to roughly the average cost per conversion I got for CPC. I was curious to see if Google would find sweet spots that I had been missing or whether they would bid as high as they could to take as much money off me as possible. Summary: CPC outperformed CPA on all key metrics, including: 4.4% higher conversions, 9.4% lower cost per conversions and 8.0% higher profit.

The detailed results are as follows: 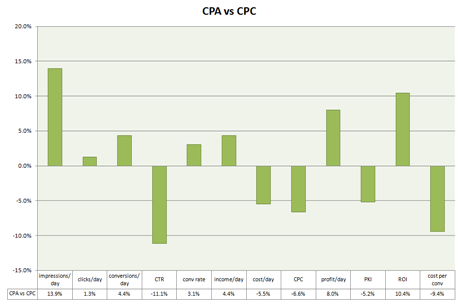 It wouldn’t be wise to draw any sweeping conclusions from one test with a limited amount of data. However I believe the results show: