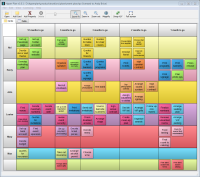 I quietly launched Hyper Plan v1 yesterday. I thought I would write a bit about the approach I have taken, as it might be of interest to others planning product launches. It is also a good way for me to gather my thoughts for later reference.

I like the idea of validating a product without actually creating it first. I did that for my start your own software business training course, waiting until I had enough deposits before I actually sat down and wrote the course (all 460 slides of it + exercises). But I didn’t know how to do that with Hyper Plan. Validating software is harder.

No-one was telling me that they needed a better visual planning tool. It was just an idea for a piece of software that I wanted. I could see that a lot of people spend a lot of time sticking Post-It notes to walls. But I couldn’t see any other software quite like what I had in mind. And I had no idea if other people would buy the product I had in mind. So it is quite risky. It would be much less risky to make a variation on an existing successful product. But I just can’t get excited about that. Also I have a steady income from PerfectTablePlan, so I can afford to take some risks.

I talked to various people I knew about my idea. But it was difficult to get far without having some software to show them. Also I didn’t want to ask friends for money, so this limited the value of the feedback. I could have phoned up some businesses and told them “It’s like a planning board, but in software” and asked for some money. But I didn’t really see that getting me far either.

I could have started an AdWords campaign and put up a landing page. But it was hard to describe exactly what the product was going to be. Partly because it was different to anything else I had seen. But also I didn’t know myself! I had lots of ideas and design scribbles, but I didn’t really know what the end product was going to look like in detail without creating it first.

So I decided to build something quickly, iterate on feedback and see what happened when I asked for money (the only true validation). Even if it failed, at least I get to do some programming!

I started coding on 08-Sep-14. By mid October I had thrown up a website with the first beta version for Windows and Mac. I allowed people to download the beta in return for giving their email address. The beta put up a warning that it would expire on 17-Jan-15. This meant I didn’t initially have to write any trial/licensing code. I made it clear that the plan was to have a commercial version for sale before then. I emailed the list each time there was a new release and encouraged them to send feedback.

I put out a number of beta releases and got some very useful feedback. A lot of the feedback was from fellow mISVs giving me a hard time about the shortcomings of the early UI, but that was still very welcome. The first release was very rough and ready. But it improved significantly in terms of UI and features with each release. I put out 5 beta releases over October, November and December. The world didn’t beat a path to my door, but the feedback was encouraging enough that I kept going.

Hyper Plan is written in C++ and Qt and compiles into Windows and Mac binaries. I have written about why I decided to develop it as a desktop tool elsewhere. It is around 20k lines of C++ code. About 100 lines of that code are platform specific, mostly to try to improve the look and feel on Mac OS X.

I also planned the marketing, wrote a quick start guide, created the website and built installers for Windows and Mac. Not bad for 18 weeks, part-time around various other commitments (mostly PerfectTablePlan and a little bit of consulting)! It helps that I was using technology and tools that I have used extensively before.

I have tried to follow my own advice and cut some corners:

I can improve on all of these later. However the software seems very solid, with only 1 crash reported in third party testing (now fixed).

I would have liked to have got to v1 even quicker, but (inevitably) quite a few shortcomings in my original ideas had to be addressed during the beta to make it a useful product. Also, I couldn’t resist a bit of gold plating (animations with easing curves, oh yeah!).

I decided to go for a fully functional, time limited trial for Hyper Plan on the grounds that the more invested in it people become, the more likely they are to buy it (see this article for a discussion of the merits of different trial models). I didn’t want the standard 30 consecutive days trial, as I know many people install software, forget about it for 30+ days and then can’t continue with the trial. So I went with 7 days of non-consecutive use. I may A/B test longer trial lengths in future.

The product is positioned (in my mind at least) as a better alternative to sticking Post-It notes to the wall and a cheaper and simpler alternative to fully fledged project management tools. This rather limits what I can charge for it. I wasn’t sure whether to price the product at $30 (for an impulse buy) or $50 to try to send a signal that it is aimed more at serious users. So I split the difference and went for $40. Also that gives me some room to experiment with discounts. I may experiment with different prices in future.

I haven’t added it all up yet. But the total expenditure to date for Hyper Plan is a few hundred dollars. This was mostly third party testing by testlab2.com, the cost of the hyperplan.com domain (which I have been sitting on for a few years) and fees for sending out email newsletters. I already had icons, a hosting account and a web template from previous projects, so there was no additional cost there. Obviously the opportunity cost of my time is a lot more.

Initially I plan to concentrate on:

Some of the keywords I would like to get traffic on have an estimated top of page 1 bid price of £23 in AdWords. Yikes. But I have a lot of experience with AdWords. Hopefully I can pick up some well targeted and much cheaper clicks with a long tail strategy (using the Keyword Funnel software I developed). Only time will tell.

I have quite a few other ideas that I can try. But I am still very much validating if this product has a market and, if so, what I have to do to get the elusive ‘product-market fit’.  I don’t plan to spend much effort and money on marketing until I have that better figured out.

292 people had given their email address to download the beta by yesterday. Most of the sign-ups came from mentions of Hyper Plan in my PerfectTablePlan newsletter, on this blog and on a couple of forums. I didn’t do any paid advertising and, as yet, there is very little organic traffic to the Hyper Plan website.

There was no big launch. No press release. No party. Not even a tweet. I just announced v1 to my mailing list of 292 people yesterday morning. I offered a discount to anyone who purchased a license in the next 7 days. I had absolutely no idea how many sales I would get.

I got 12 sales and a couple of enquiries about organizational licenses yesterday. That is better than I expected for day 1. So I am quietly encouraged that there may be a market for this product. But it is very early days yet. Thankfully I have PerfectTablePlan paying all the bills, so there is no pressure to hit any revenue targets.

Obviously I am not going to miss the chance to try to flog you a license, dear reader. Are you interested in visual planning software? Do you know someone that might be? Hyper Plan is very versatile. I have used it for planning Hyper Plan development and marketing, my daily TO DO list and tracking Xmas present purchases. It is also highly suitable for agile/Kanban/Scrum type planning. You can find out more here and download the free trial here.

If you buy a license by the end of 22-Jan-15 you can get 20% off (feel the marketing!). Use the coupon SSWBLOG in the shopping cart to get the discount. 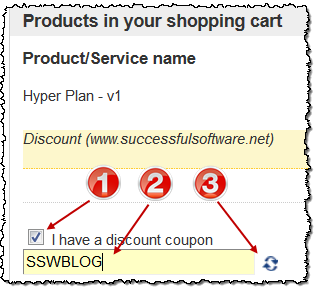 If you have any comments on the product or website, I would be happy to hear them.