I have been furiously coding a new product. Easy Data Transform. It is a Windows and Mac tool for transforming table and list data from one form to another. Joining, splitting, reformatting, filtering, sorting etc.

I have been thinking about this product idea for years. In fact I threw together a janky prototype back in 2008. It allows you to perform various operations on a pair of lists. 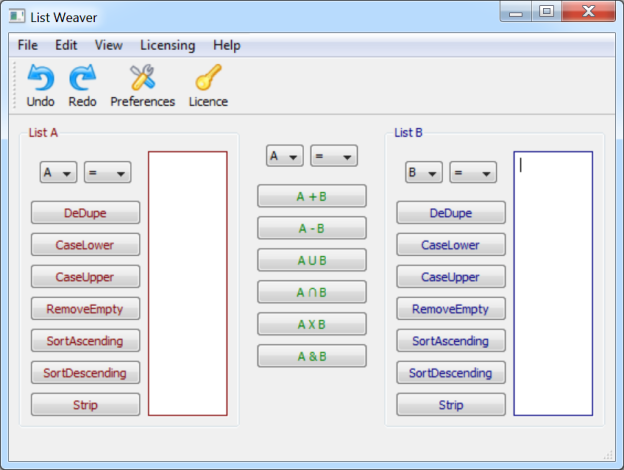 I used this prototype for jobs such as creating a list of emails of people who had bought Perfect Table Plan v5, but hadn’t upgraded to v6 yet. It worked. But it wasn’t very good. The biggest annoyance was that each operation obliterated everything that came before. Which made it very easy to lose track of where you had got to. And there was no repeatability. It was also limited to lists and it became clear that I really needed something that could also handle tabular data. I never released it.

But the idea has been running as a background process in my brain for 11 years since. And I think I have come up with a much better design in that time. Finally I had mature, stable versions of my Perfect Table Plan and Hyper Plan products out, so I decided to go for it. I am really pleased with how it has turned out so far.

If you aren’t embarrassed by v1.0 you didn’t release it early enough. And so I have cut lots of corners to get this first public version out. The documentation is only part written. I created the application icon myself  in 10 minutes. There is no licensing. The GUI is lacking polish. The website would make a designer cry. But the software seems fairly robust. My 13 year old son wasn’t able to crash it after 10 minutes of trying, despite financial incentives to do so.

I did some market research and spoke to some people who knew a bit about this market. But I deliberately didn’t look closely at any competing products, as I didn’t want to be mentally restricted by what others have done. For better or worse, I want to blaze my own trail. Copying other people’s stuff is a zero-sum game with no net benefit to society.

Most of the things that Easy Data Transform you can do, you can also do in Excel or SQL. My claim is that it is much quicker, easier and less error prone to do in Easy Data Transform. No programming or scripting required. I am hoping that people will be able to start using it within a couple of minutes of downloading it (I plan to do lots of usability testing). Will people pay for that? I hope so. I’m not aiming it at programmers. Perish the thought.

Naming is hard. I came up with some 70 names. Things like ‘Data Hero’, ‘Transform Flow’, ‘Transmogrify’ and ‘Data Rapture’. But the domains were taken, people I asked hated them or there was an existing service or product with that name. So I ended up with Easy Data Transform. It does what it says on the tin.

Why desktop? Surely no-one is writing new desktop apps in 2019? I believe a desktop solution has some real advantages in this market. The biggest ones are:

Easy Data Transform is currently free for anyone to use. You can get it from the super-minimalist easydatatransform.com website. The current 0.9.0 version expires on the 4th August 2019. You will then be able to get another free version. Once the product is mature enough, and if I am convinced there is enough demand, I will release a paid version. The free beta will probably last several months. Please try it and let me know how you get on. I am particularly interested to get feedback from anyone using it for real day-to-day tasks.

Of course the real challenge is always marketing. How to get noticed amongst many competing products. As well as helping to improve the product I am hoping that this extended beta will also help me to get some traction and better understand the market. For example, what price to charge and what trial model to use. Watch this space.

This work is licenced under a Creative Commons Licence.
Loading Comments...